Skip to content
Trek Up the Tower Presented by The Wellbeing Partners | Feb. 18, 2023
FacebookInstagramEmail

Going for the Record

Nebraska locals Robert Borer and Mark Adamson are repeat climbers at Trek Up the Tower, an annual vertical stair climb up the First National Tower in downtown Omaha. At 40 flights, the Tower is the tallest building between Denver and Chicago.

While Borer, known to many as "Shirtless Bob," will be 60 on Trek Day (February 16, 2019) and Adamson will be 63, their commitment to physical fitness is reflected in their motto: You can't help aging, but you don't have to get old.

They walk the walk, too: Borer and Adamson are returning to Trek Up the Tower in 2019 with a renewed enthusiasm, and a new goal to break the record number of climbs – together. Their goal is to complete the Trek Up the Tower Vertical Mile, in which participants climb the tower 10.3 times, plus five extra climbs. That’s a total of 15.3 times up the Tower, with 617 flights of stairs and over 13,000 steps. This goal will exceed the current record, 14.3 climbs set by Andy Hanson in 2018, by one additional climb. As if that weren't enough of a feat alone, the two plan to do the climbs consecutively, without taking time to recharge between ascents.

They're announcing their intentions of breaking the record to incite any challengers who may have what it takes to out-climb them.

Borer and Adamson are no strangers to fitness. Adamson was a founder and the original Race Director of the Omaha Corporate Cup Run, and has completed dozens of full marathons in Boston, NYC, Chicago, LA, Omaha, Lincoln, and more, in addition to having competed in several Willis (Sears) Tower stair races, where he finished 51st in the Elite Division of 111 racers in 2017. Adamson logs his exercise habits, and by Trek Day 2019 he will have exercised every day for just over 13 years. You read that right: 13 years of exercising every day. In 2018, he's averaged over 10 miles of running a day.

Borer, a Lincoln fire fighter, also competes in athletic events and races, but his most recent claim to athletic fame was his appearance in the Spartan Team Challenge in 2016.

Borer and Adamson have a passion for the place Trek Up the Tower and its founder, WELLCOM, have in the community as a whole – not just for athletes, but for anyone seeking to improve their wellbeing. WELLCOM, formerly known as the Wellness Council of the Midlands, is a nonprofit organization dedicated to helping businesses elevate their worksite wellness.

"Bill Kizer was right about the value of work-health programs forty years ago when he founded WELLCOM," Adamson noted. "Back then I weighed 60 pounds more than I do now. I changed. Anyone can." This year, Adamson plans to run in honor of Mr. Kizer, who passed away in 2017.

"He was a great man and had a vision exemplified in Trek Up the Tower," Adamson explained. An event that serves both corporate and community wellness, Trek Up the Tower is WELLCOM's primary fundraiser.

When asked why they keep trekking, both men cited the challenge and the camaraderie of the event.

"I met Mark at this event," noted Borer, "and we've become great friends. I encourage everyone to come out and do it."

No matter your current exercise habits, your pace, or your personal fitness goals, these two acknowledge that Trek Up the Tower is for everyone, and that participating doesn’t mean you need to perform like these athletes. Many Trek Up the Tower registrants climb the Tower to achieve a personal goal, like setting a personal record or just simply finishing.

You can improve your fitness by taking small steps today.

“A good brisk walk three times a week for 30-60 minutes is great exercise," Borer continues. Even trekking up the First National Tower stairs takes less than 15 minutes for the average participant, even without training.

If you're interested in training for Trek Up the Tower, Borer's advice is to "build your aerobic base, do some leg strength work, train on stairs twice a week from two months out, taper down and be rested for the race.

"Remember during training that recovery is as important to improvement as exercise, so take days off, and don't over-train," Borer suggests. "Listen to your body and be patient. Improvement takes time.

"It doesn't matter how fast you are," he concludes. "It's about being part of something great, suffering through a challenge, enjoying the fellowship of others, and giving yourself some motivation to exercise regularly."

Adamson sums it up: "Anyone can do it!" 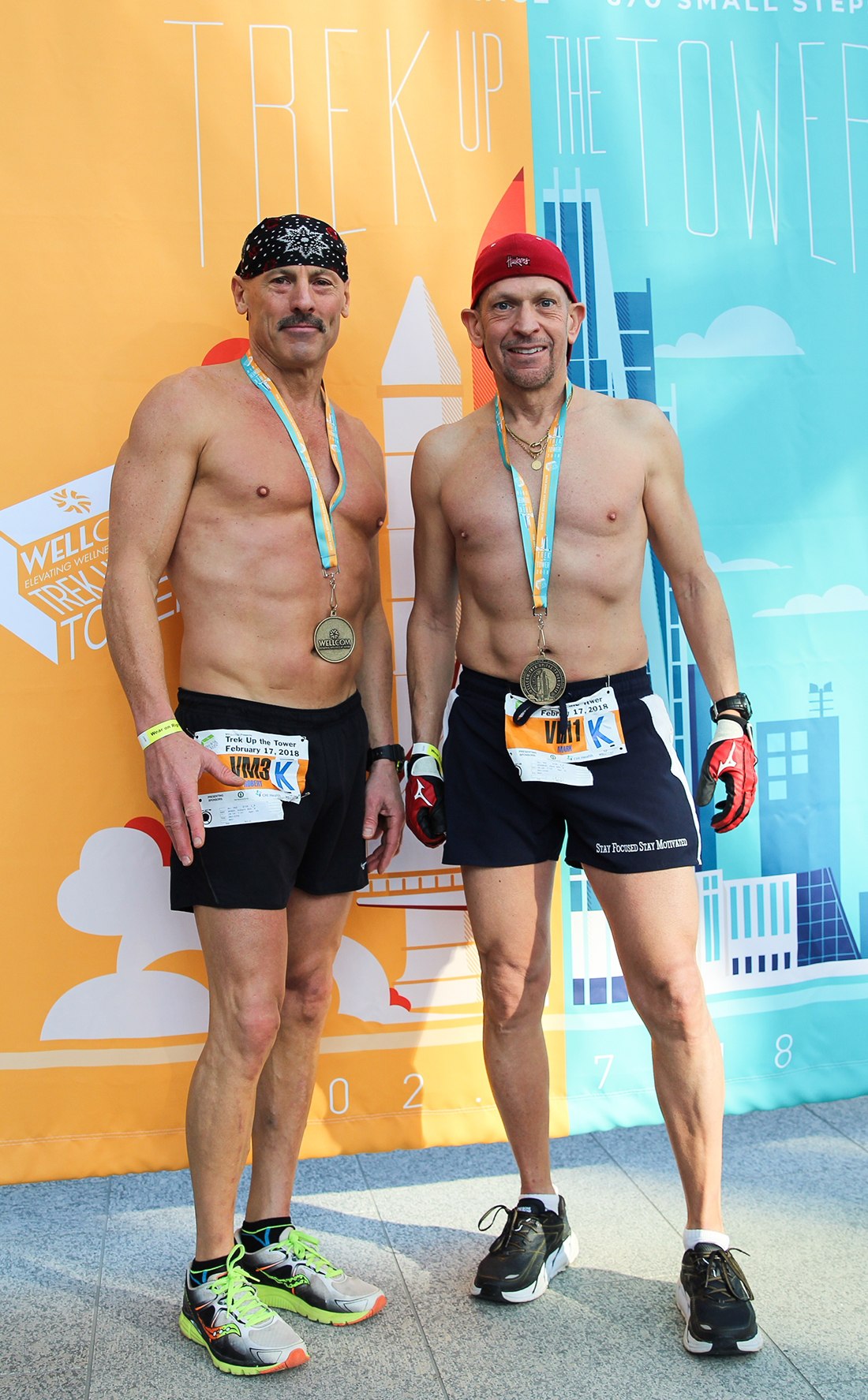 REGISTER FOR TREK UP THE TOWER